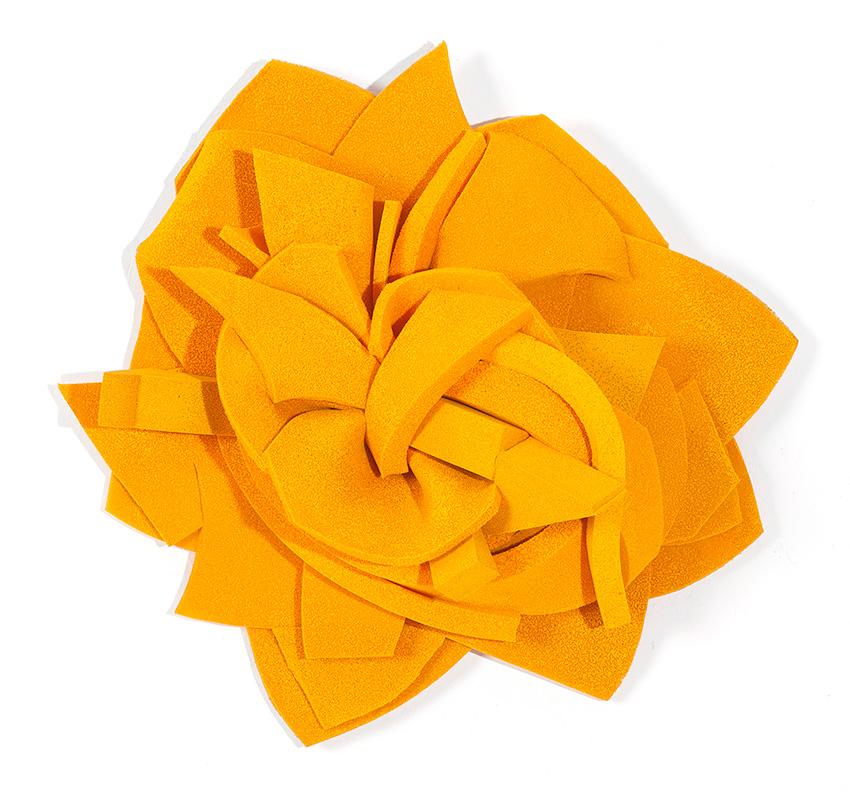 We can see Aynur Önürmen’s second solo exhibition as a continuation of her first exhibition in terms of her approach to materials and form analysis. We see that she gets in a transformation in terms of their thematic approaches. These themes refer to both the objective world and the old experiences. In some of the new art works that we have seen in this exhibition, she took the output from the ceramic and flower objects that she made many years ago. She combined these motifs and forms to the sponge, reconstructed them with abstracting in a deconstructive manner and produced a series of works of art. We must say that the artist has undergone a transformation with her new exhibition that she creates her own synthesis in the fields between organic and geometrical abstraction. On the other hand, we see the first example of a different plastic effect in the artist’s piece of origami art inspired by her art work in large-scale business. In places, we see that the color effects create a mystical atmosphere and that the form forms an integral whole with color. The artist has put forth the main problematic in her art works and also with the studies on the relationship between piece, whole and color.

We know that the formal roots of contemporary abstraction are divided into two different ways in the early period. Artists show sharp examples of historical abstraction approaches based on geometric forms and organic forms in history. These attitudes presented the perspectives of the artists about the quality of life. They have given metaphysical meanings to these geometric forms, from understanding what is the basis of the world and from the mystical nature of geometry to the spiritual effects of color. On the other hand, they reduced art to basic colors and forms. Perhaps it was a way of understanding the spiritual reality for them. It is necessary to mention Minimalism, which defines the reductive effect of formalism as the most logical result increasingly, and even it works as a “specific object” rather than a sculpture or painting. As is known, we are now in a time where all kinds of references, traditions and styles are together and we are familiar with such works. Numerous examples of art history are under our control as we are living in a hybrid and foggy world. Thus, like every artist, Aynur Önürmen has established relationships with the fields of history of art that she interested. Modern sculpture gave permissionintuitive results in the process of creating its own language, especially from the art of abstract sculpture, but she was a follower of a determined discourse rather than experimentation.

We see that this fictional logic, which is formed by the assembling of the parts that have become the main behaviors, has also gradually developed in this exhibition.

Without exception, all the art works in the exhibition were produced with sponge. Sponge has become a material that the artist gradually internalizes and owns, and it has also created a unique language with its form and constructs. These sponge pieces, which are the main elements of the works, are usually found. In fact, when these parts are the objects of industrial design, they become a choice in the hands of the artist and begin to turn into a plastic form. These fragments, which we can call waste, are included in an intrinsic and complex structure to form the whole of the work.

When we face the works of Önürmen, we perceive that there is an inherent relationship between the material and the forms it forms. In the process of production, there is a natural flow between the material, the sense and the structure, and the emotion that she wants to create in her art is HER WAY.