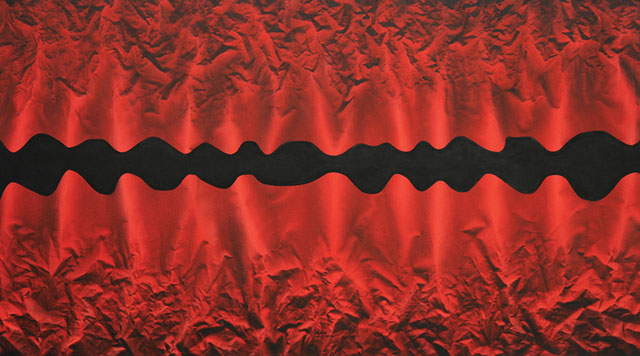 Çiğdem Erbil gives the painting three dimensionality much more explicitly through visualisations such as creases, wrinkles, crinkles, deformation which she uses as the background in some of her paintings and as the main element in others. This dimension seems to be highly functional in that it reflects both the objective world and the subjective world.

The artist’s state of mind, which changes frequently or is obliged to change, could be balanced in her paintings due to the strong nature of her individuality.

It looks as if two basic concepts are dominant in all of her works. One of them is limitlessness and thereby freedom, the other is the chaos of subjective world rather than objective world…

The artist is able to face us, the viewers, having successfully combined her technical skill and aesthetic concerns harmoniously.

In her previous solo show and during the following period Çiğdem Erbil continues to present us the same theme while loading innumerable meanings into it. In her works, which she materialised on canvas, while combining classical aesthetic sensitivity with a modern envisaging technique, she tells us – she is able to tell us – the rage and complexity present in both her inner and external world very explicitly, clearly, and also ironically.

All of her latest works appear very consistent and balanced. In each work, freedom and sentimentality are just like ways of narration.

I can say that the colour contrasts in her paintings are very successful in reinforcing the meaning of the narrative. Luminous white, with a contour of irritable indigo blue or magenta red can convey emotional perversion or the dilemma of the inner-external worlds in a very clear manner. Besides the colour contrasts, formal opposites are also too strong to be dismissed.

The content in some of Çiğdem Erbil’s paintings, perhaps some hope for the future,  seems to create a union of expectation between the painting and its receiver. It is as if the dreams and hopes imply embracing the future and surviving.

I am of the opinion that as long as colours and forms can say more than what we have learned so far, a painting becomes good art, powerful art. There, Çiğdem Erbil’s works are able to give us this opportunity.

Although some of the subjects the artist has dealt with are feminine themes, for example hands-gloves and female clothes, one cannot sense femaleness and femininity in her paintings. On my own behalf, I have not seen any works of her that I can say “This painting is done by a woman”.

I think that painting is an art of details. These details can sometimes be a colour splotch, a broken line. Sometimes this detail can fit into one canvas, and at others it may spread out to more than one canvas. Just as the case with Erbil…

In addition to artistic mastery and originality, Çiğdem Erbil’s series “The Discourse of Colours”, which is comprised of approximately 25 canvases of 80X150 cm., can present its receiver the messages of life like a detail, a secret manifesto in a stealthy manner. In this series, even though colour seems to be the dominant element, when viewed and grasped side by side and one after another, it looks as if the colours are pushed to the rear and the narrative comes to the foreground.

Also the crinkles, and the lines which divide and intersect these crinkles are like the symbols of the fragmentation of life in her paintings, most of which were done with oil painting on acrylic, and made up of consecutive contrast colours.Since a good artwork not only contents itself with arousing aesthetic concern, but also it shows the inevitability of giving an effective message, I can say that Çiğdem Erbil’s paintings deserve every praise.