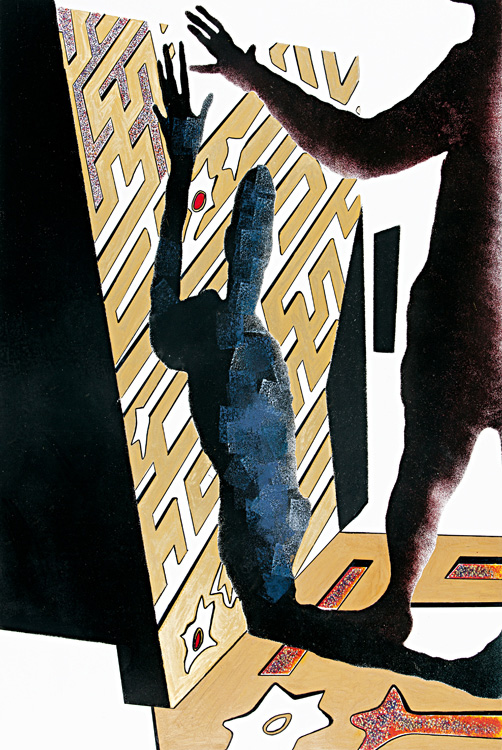 Demir Kardaş is a painter who has mastered the difficulties of visual communication: he is proficient in using the mediums of acrylic painting, India ink, lino-printing, and oil-painting; further, he has assimilated the essentials of various artistic schools such as Realism, Symbolism, Pointillism, Expressionism, Conceptualism, Minimalism, Surrealism, Abstract-Expressionism etc., and he is capable of fluently communicating with the viewers through these artistic venues.

The paintings [70(horizontal dimension)x 100 cm] DK is about to exhibit towards the end of 2012, entails an uncommon theme: “occurrences by uncaught perpetrators”.  Among them, fraud, corruption, stealing, kidnapping, abductions, even murder can be mentioned; all visual depictions both horrifyand engulf the viewer with a mystifying curiosity.  The common and essential domain of the paintings is Turkey; yet, the particular location of each painting can be any place where such events had occurred.  On the common domain which has been represented with white floor-tiles in a Minimalist manner, what we can call “Crime Scenes” are depicted by using various Oriental motifs and vivid colors, and the tragic events that happened on these particular locations and their victims are depicted with partially abstracted male/female human bodies and their shadows in panicky hysteria and horror, and they engulf the viewers with the same shuddering.

To create these paintings, DK has successfully used acrylic painting, India ink, metallic paint (gold, silver, copper), and oil-painting where needed.  In lieu of collage, by lightly painting-pressing-peeling the meticulously created figurative templates on the matrix and overpainting them, he was able to transfer them into meaningful, mysterious, and tension-filled images.  The warm-versus-cool color balances are successfully positioned on the paintings.  The various partially Oriental labyrinths and motifs on the particular locations, provide the paintings with depth, energy, and mystery.

DK has made these paintings on “glossy cardboard for art”; when I questioned the resistance of such a matrix against moisture, light, and various forces, DK has  assured me that he had them subjected to special treatments against such effects.

Demir Kardaş, in addition to producing successful art works by using a rather difficult medium such as “Lino-printing,” has also earned in this branch an award in 2012, in the 71. Artistic Competition organized by The Turkish Ministry of Culture and Tourism.

To master working with various painting-mediums and understanding the requirements of various artistic schools increase the artistic value of a painter; hence, I could declare that Demir Kardaş is progressing in his artistic quest rapidly with self-confidence and enthusiasm.  I strongly recommend that you view his forthcoming exhibition towards the end of December 2012.

Eyüp Ataş ‘Through A Glass Darkly’