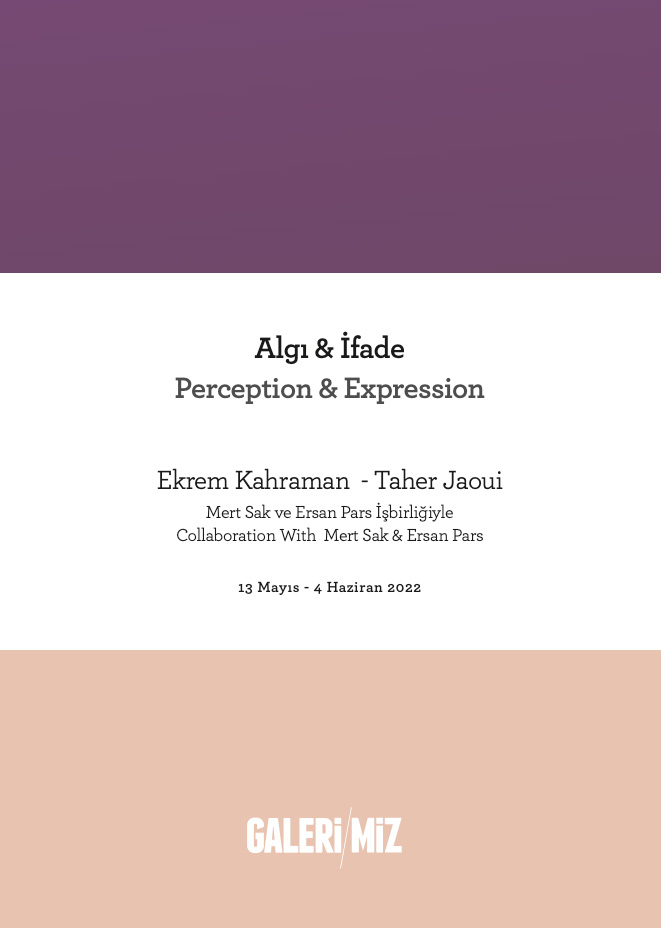 Gallery / Miz is hosting the exhibition titled “Perception & Expression” by Ekrem Kahraman and Taher Jaoui, curated by Mujdat Kuma, between 13 May – 4 June 2022.

This exhibition was founded on two different perceptions and expressions of two artists, Turkish and French. In the exhibition, digital works of young artists Ersan Pars and Mert Sak accompany the contrasting duo. The exhibition engages the audience in perception, imagination and art with the concepts of expression of the artists intention to create and work. It prompts reflection and comparison on multiple dialectical relations.

The German philosopher Hegel’s “geist” (spiritual existence) can be cited as the basic reference to the creation of these two artists, who do not know each other and come from different cultures and generations, and their way of questioning and perceiving the world, nature and life, which are private and mysterious. Ekrem Kahraman and Taher Jaoui come to the fore with different rituals of expressing the spirit and mind range of “geist” as a perception style. Simultanesly, the digital artists Ersan Pars and Mert Sak, reinterprent the personal artistic experience and work with these expressionists perspectives which meet the two contrasting ends of the ‘geist’ axis, synthesize them from their own perspectives and attempt to open a new door for us.

Today’s contemporary art, which is interdisciplinary and hybrid, often follows philosophy and tries tomakesenseoflifethroughthishistoricalaccumulation.However,todaysartistswiththeirform of expression and brave works which arouse new intellectual questions about the possible future in the minds of the audience. Maybe this is some kind of future warning to humanity. Expressive art, which is based on this conceptual priority, is directly based on subjective perception and re- expression. Perception naturally has demographic and geographical (cultural) conditions. This is reflected in the expression of the contemporary artist against of the contemporary artist’s life expressions. The life that the artist perceives not only with his eyes, but also with his mind and consciousness, passes through a contemporary filter with all his social and individual accumulations and gains a new expression-extraction selectively.

EkremKahraman,whoisfromthe68thgeneration,spentasignificantpartofhislifedealingwith the land; focused on existence and the future, not refraining from diving into infinity, gradually becomingwiserinperceivingand examiningitbysaying,“Iamadreamerfarmer!Mypictures are my land!” He is an important contemporary artist, confirmed by his words. When he looks at the great chaos in the universe, he is a person who constantly turns his face to nature and history, approaches the endless order of the universe with envy, and has lived his whole life with struggle. This combative identity is embodied in the works of the artist.

His scrapes his painting from consept, image, poetry, philosophy like a soil to be cultivated, constantly search behind the representation. The nature impressions abstracted by Ekrem Kahraman bends the reality of the landscape painting with processes that are articulated behind the image, such as magical lights and cosmic doors that suddenly appear. This allegory, whose rules have been destroyed and recreated in every sense, is the artist’s revolt against the traditional. The hero, like a land artist, reflects his practice on the canvas as it is on and within the soil. It can be said that what is seen and said in his painting comes from a common thought. The language and image of his thoughts and dreams; It is the poetics and political attitude of Ekrem Kahraman’s art. Despite, coming from an academic tradition, the artist is also known for his personal myths unlike the other artists in his field. He often touches on subjects such as the nature of art and the provocative face of nature, existence, absence, emptiness, human history, phantasm and truth. Ekrem Kahraman’s previous highlighted works are Our Place (2001), Unrequited Utopia (2010), Prayers for the Earth (2015), Times to Remember and Speak. He is participating on the exhibition with his new series called Epic Future 2019. Kahraman’s works from the series Epic Future / Epic

Future presented in the exhibition are the last stage of one of the latest series, “Times to Remember and Say”, and also invite a new performative process in the context of personal, cultural, political, contemporary memory and vital objection that the artist has been working on for 6 years. It bears the same name as his book of poetry ofapproximately 1300 pages. It also offers an epic vision of the future for those who see this new process as a disaster.

Taher Jaoui , on the other hand, started his art as a brand new journey by first completing his education in rational sciences (mathematics) and then choosing art; He is a Tunisian-born French citizen and a prominent figure in the art world, who creates fascinating and labor-intensive works with an idea that continues the legacy of the abstract expressionism movement of the 50s and 60s. Jaoui’s paintings are rich collections of interwoven, densely layered forms, vibrant colors, meaningful and dynamic gestures and include occasional math and formulas. In a series of spontaneous movements that are directly inspired by the way of the canvas responds to the layers of paint and the gestures applied to it, Jaoui likens his work to a dance routine with a familiar partner. Jaoui’s artistic practice has been influenced by the philosophy and attitude of post-WWII abstract expressionism, which shifted from African primitive tribal art, graffiti, glitchart and the COBRA movement to familiar forms abstracted from simple forms and patterns. The surface of his canvases, from the blackboard-like scribbling sections in the classrooms to his semi-childlike drawings, becomes the workspace where the artist applies his subjective forms of expression. The concept of building something made up of various singular elements is a direct result of computer scienceandengineeringstudies.Someoftheseare includedinJaoui’scomposition.Itcomesto life through abstract mathematical signs and formulas. These elements and forms, once again develops a strong link with the concepts of early expressionism, which takes into account the ideas of quantum mechanics by conceptualizing it together with the spatial view of surfaces. Works that are exclusively automated or subconsciously constructed actually require careful planning and use of space and materials. Jaoui’s work balances his thoughts and feelings during creation, while at the same time conveying rebellious, anarchic, deeply idiosyncratic, and even in some way nihilistic feeling. But it still provide an endless basis for viewer dependent interpretations and experience. Familiarity and mastery of the materials are essential for the creative process, though intrinsically impulsive and utterly unrestrained, highly dependent on the audience’s ability to respondquicklyandanticipatethe waytheelementworkstogether.Workingbylayeringpastels, oil paints and acrylics, the artist focuses on the rich depth of his works by creating a raw texture thatdirectlycaptureseveryphysicalenergyandcarriesittothesurface.Thus,theartisticpractice, which acts as a channel to convey the artist’s thoughts, feelings, vision and Jaoui’s source of trust and peace; makes the completed work actually becomes a document of the process of reaching these feelings.

While the poetic spirituality of Kahraman seeks the historical and contemporary spirit behind what is seen and represented in a semi-provocative, semi-serene and timeless way with subtle metaphysical codes, Jaoui’s rationality, rising from the engineering tradition, while reducing the concept of science to the terms and formulas of mathematics, expresses the subjects of human and contemporary life as spontaneously and colorfully as possible in his compositions and shows that he prefers to build his painting based on this expression. These last approaches of both artists are undoubtedly based on their own art- making processes and their artistic, conceptual and personal experiences in these processes.

“Perception & Expression” intends to explore the spectra of these two expressive artists who continue to shape their artistic creations with these contrasting approaches. Although these artists contrast in style and method, tey stay true to the expressionist tradition of deriving an understanding of life. The digital young artists Ersan Pars and Mert Sak, will act as a bridge between these two artists, through an interdisciplinary approach create a synthesis of the extreme perceptions.