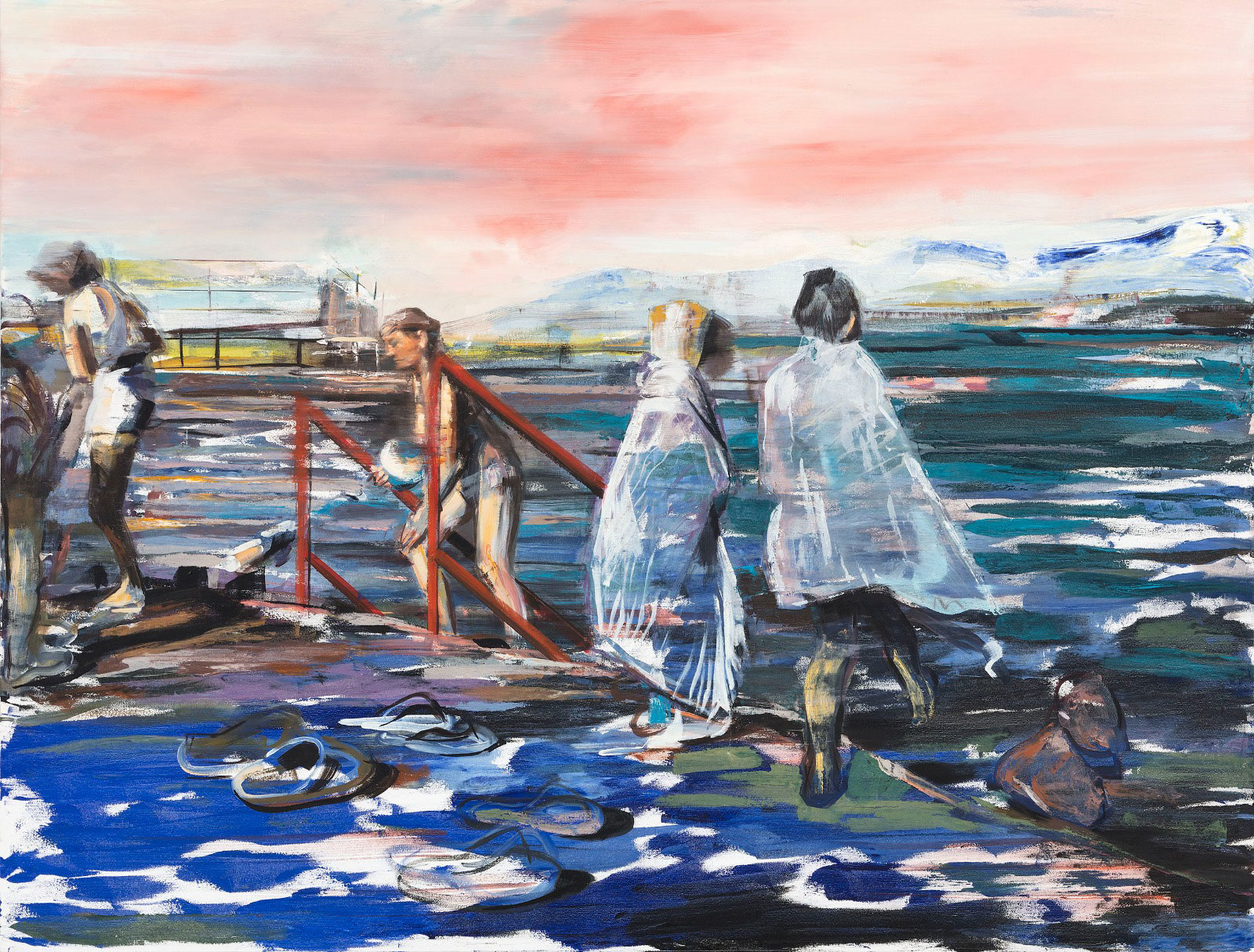 Every work of art boils down to the determination of a frame. Regardless of their boundaries and dimensions, each ultimately presents the scope of a point of view. However, this frame is not measured through the wideness of the surface or plane. It also has a movement toward depth. For example, although a canvas painting may be framed in a square, rectangle, or sometimes other geometric shapes, what will be perceived sometimes breaks the frame and connects the plane with external factors. Many dimensions ranging from memory to experience, from knowledge to intuition, and from emotion to judgment, reach a common dynamic simultaneously.

The artist’s eye seems to wander in the universe and look for a useful frame. A place must be chosen and looked at from such a point that all the lines, colors, areas, textures, etc. that can fit in that frame capture each other within coordinates and show us the reality, lived experience, and perhaps even the truth beyond the frame. After all, how can a composition be described otherwise? So what is a canvas painting or what can we watch there? The first things that catch our eye are probably several objects, figures, spaces, and events happening between them, but their movement towards depth rearranges everything we see, gives it new meaning again, and the composition is thus concluded.

When we encounter the paintings of Edvard Munch, we may find many criticisms about their technique; even the figures, spaces, and events may not interest us or may even repel us. However, when we focus our attention on those paintings, we feel the existence of an atmosphere surrounding the figures, spaces, and events, which is not limited to the composition of figures, space, and events. That atmosphere takes over every situation attempted to be conveyed in the painting and enslaves it to the feeling of a northern light; the events always become autonomous in meaning when subjected to the domination of that light. We must emphasize that the importance of Munch in art history comes from this atmosphere effect, and his compositions are remembered with this feature. David Hockney and Edward Hooper are also like this. Isn’t what we watch in them, beyond a few figures and space, the atmospheres of their own geographies or their own societies? In these paintings, there is usually no exciting or interesting event, but the atmosphere that envelops the spaces is the event and, therefore, the composition itself.

Let’s return to a sentence we wrote earlier; we said: The artist’s eye is as if wandering through the universe and searching for a frame that will be useful to him… And let’s add this to that sentence: Not all frames have the same atmosphere; although similar shapes and systems have infiltrated each of their bodies, there are differences in atmosphere between them. In other words, the arrangement of forms and systems gains meaning within the environment created by light and space, which, as we previously stated, is the point where the composition is completed and the meaning becomes autonomous.

Let’s now bring the words to Emel Başarık’s exhibition “6 Numara”. In this exhibition, the artist portrays a beach known as “6 Numara” on Burgazada and the crowd she observed there for a while. The figures are placed between the island architecture on one side and the openness of the sea on the other, and the relationships of those figures are depicted; piers, stairs, and colorful covers belonging to the beach also clarify the scene. This is an Istanbul landscape that has been etched in minds for years: the effort of finding and revealing small spaces that have been left behind in the corner of a city that is rapidly changing, losing its traditional spaces and increasingly adopting a wild lifestyle, as if to add a nostalgically planned respite to the suffocating cityscape… or simply the enjoyment of seeking refuge in one corner of the city that is in line with memories. Of course, the viewer can also be caught up in the same feelings when looking at these pictures; it is not very likely to resist the charm of nostalgia.

But one thing is certain: explaining this exhibition solely with these pleasant feelings, that is, being unable to go beyond the nostalgia of a place, would be a naive approach; it would also mean that we are satisfied with rather incomplete interpretations of these pictures. Without further ado, let’s state this immediately: Emel Başarık is an atmosphere painter; her job is to place light and space at the center of the painting and let the composition be influenced by it. The movements, relationships, situations of figures in the space, and their connections with events all find meaning within that atmosphere. In other words, when the method of using light and space is removed from those paintings, what will remain is a crowded group of figures and objects accumulated in any place. However, in the frames where they are found, these figures and objects determine their own positions and attitudes with the possibilities of light and space, creating the mood of the environment. To better understand this, we also need to consider the “Geçerken” exhibition before the “6 Numara” exhibition.

The “Geçerken” exhibition was also, like “6 Numara”, an exhibition of light and space… We also saw spaces where figures and objects came together there. These mostly showed us the insides of public vehicles, the corridors of subway stations, or passage areas squeezed between cities. The movements of people were extremely monotonous; passengers had taken on similar forms due to the direction of those spaces and their similar behaviors… We did not have a chance to watch the different architectural characters of cities, the natural landscapes dependent on the geographical conditions in those places, or the behavioral states of figures related to their cultures, because those spaces belonged to nowhere places that were spread throughout all large cities. And if these places were to be painted, the nowhere place also had to have a character that could stand out with the virtue of an atmosphere that would be loaded onto the selected frames. Le Corbusier said that to paint the changing and deviating Paris from its ancient appearance, one had to forget the boulevards, stairs, historical structures, accordion players on sidewalks, writers and poets getting into arguments, or famous passageways. According to him, the image of Paris was now nothing more than the atmosphere in the frames of car windows waiting in traffic; Paris was watched from those places. Le Corbusier’s claim is not something that is outside the reality of art; to talk about a place is to superimpose the special atmosphere of that place onto the composition and reflect it in that way. That is also what gives deep meaning to every figure, every event, every story, every novel, etc.

The paintings in the “6 Numara” exhibition reflect a very different atmosphere than those in the “Geçerken” exhibition. It is known that a beach is different from the nowhere character of a public transportation area in terms of nature, culture, and emotions; at least on a beach there is still the openness of the sea and sky, and that place always appears in minds with a bright light. In this case, the emotional aspect of a beach painting is equivalent to the unique attitude of light and space. Some may say that there are differences between these two exhibitions by Emel Başarık, that the techniques and composition approaches in the paintings do not match each other. However, it must be reminded to them once again: Emel Başarık is an atmosphere painter; her job is to place light and space at the center of the painting and let the composition be influenced by it… Therefore, the meaning of a place is dependent on how much the atmosphere intervenes in the painting and how much it drags the composition in different directions compared to another place. “6 Numara” is therefore different from the previous exhibition and will most likely also be different from the next exhibition.

‘A Desk of One’s Own’
Curator: Prof. T. Melih Görgün