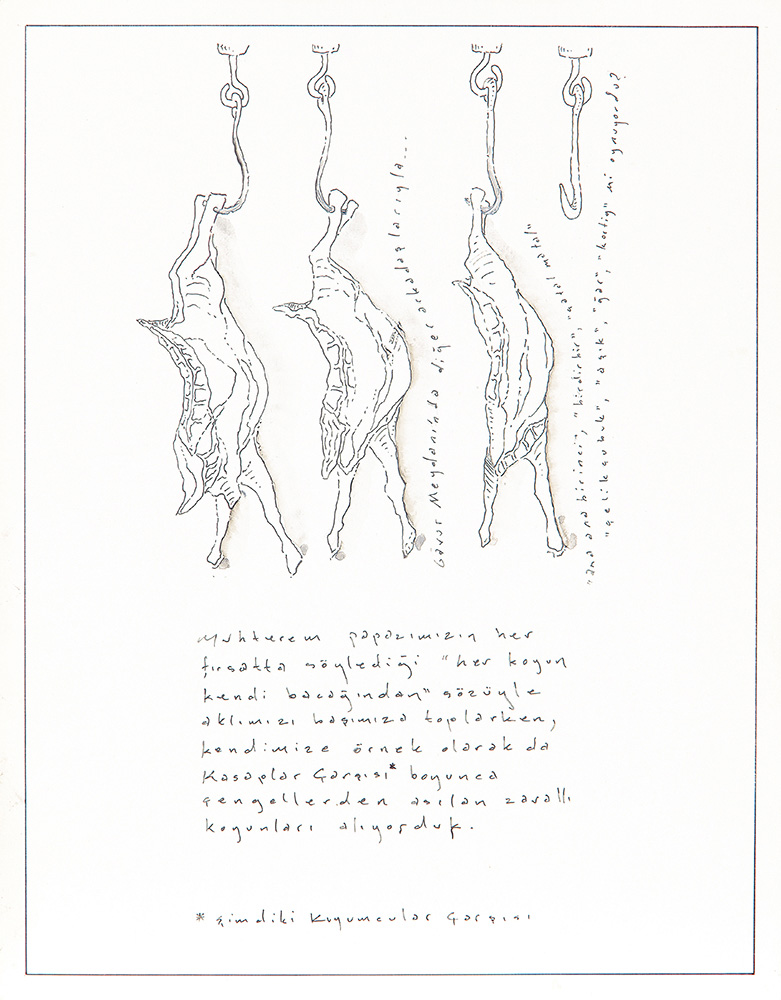 This exhibition is based on two story books of Mıgırdiç Margosyan “The Infidels’ Quarter” and “Our Ticket Was Cut For Istanbul”. The issue of the books are the old cosmopolitan nature of the city Diyarbakır. This reveals by the author’s childhood incidents. The scene of the events are mainly at “The Infidels’ Quarter”.

This neighborhood is using in a variety of languages such as Turkish, Kurdish, Zaza, Persian, Arabic and Armenian, it contains a way of life in terms of “difference”. Besides this “difference” caused some “shifting in language”. However there is a point that, it did not create either an ideal interaction or with in a popular expression a “cultural transitivity”. In Margosyan books the neighborhood described in amusing circumstances, but in fact in the deeper it carries the sign of major difficulties, ferocity and sadness.

“Open World” is an exhibition consists of two sections. The first section formed from the notes and the drawings while reading the stories. Obviously the works in this section are products that stimulated from the imagination of the stories. But these were some thoughts from a distance before seeing the real neighborhood. However, the second section is appeared entirely separate from the first part and these were the documents from the travel to “The Infidels’ Quarter” in February 2015.

In the first step the neighborhood appears from the known story in the dream world. After this journey it is physical in front of us clad in flesh. Here is “Open World” is an exhibition that the comparison of the dream world and the concrete world which is seen from “today”. This comparison neither about the dreams of the old “The Infidels’ Quarter” nor the remains of today’s concreteness. Inevitably a new story comes out of here.

“Open World”, is to re-write those stories through the Margosyan stories. And also re-imagining “The Infidels’ Quarter”, but especially with the current reality of the neighborhood.