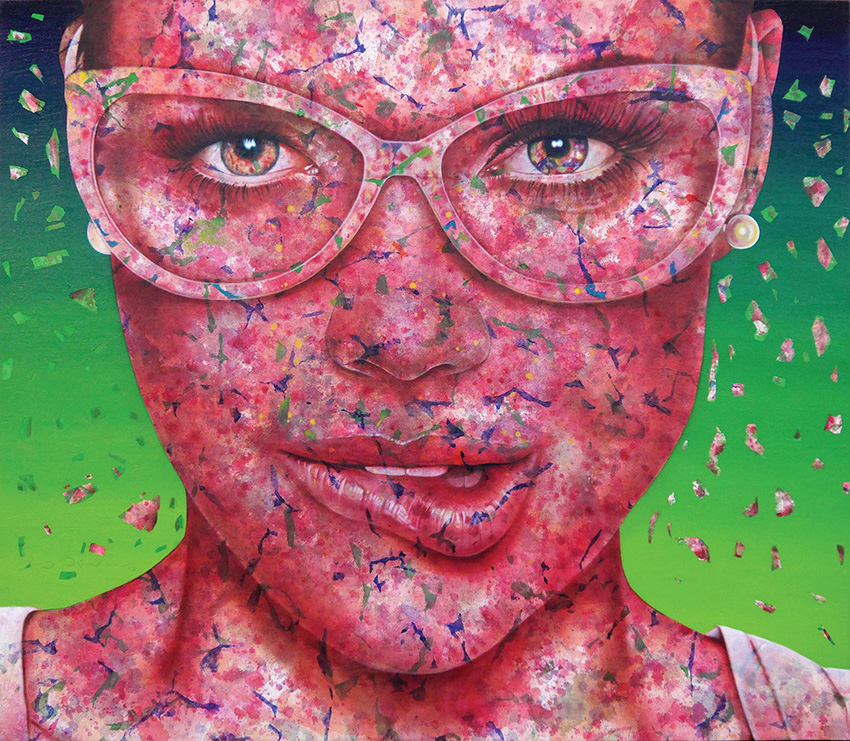 Akyol is using the heritage of portrait as a source of extraordinary richness in the art history. What brings the young artist to fore is that he brings together images which he elected from different historical periods and different cultural connections with an extremely original dialect. In his canvases elements of popular culture, traditional life, popular and modern painting, lyricism and irony comes side by side in a dynamic harmony.

The first period portraits of the artist carries traces from 80’s as the popular culture became widespread with neo-liberal economy in Turkey, began to affect daily life. In the said series the portraits Akyol painted on the color opening screen of the state television with one channel and the textile designs he applied on the portraits are remarkable. As the figures in the traditional costumes lose their holiness in a world that have lost their context, Turkey becomes a simulacrum which erupts out of the memory of figurative painting art. Akyol succeeded to turn the impossible desire like bringing together Neşet Günal’s painting with Andy Warhol’s to a surrealist experience.

Kadir Akyol loads his portraits with present time energy, unavoidability of change and transduction power of humans. His works are in dialogue with viewers which establishes a cordial and courteous mutual effect.

By Akyol’s first period, the uniqueness feeling that proceedes from the loyalty to objectivity of picture seems like about to be lost in the ordinariness of the world of serial production and speedy consumption. The uniqueness of impressions in his portraits, the profundity of the lace weave be threatened by anonymous light of geometrical, brilliant and colored reality. The fragileness of the lace that covers faces like a second skin is nothing but a nostalgic mask. These veils, covers and curtains are trying to protect the subjectivity.

In Akyol’s new series of portraits the lace weave abandoned its place to live and vibrant color strokes. With this strokes the curtain is torn and the sorcery is dispelled. The uniqueness of subject has left its place to anonymous objectivity of ideal young women faces. The subject that wears the glance is now replaced by the beauty that is the object of the glance. Beauty has no ground, no background, no history and no age. These portraits carries enjoyment, delight, desire and in line with the portraits of Andy Warhol and Richard Philips. Akyol’s works invite their viewers to celebrate the invulnerable and ageless nudity of a world that lost its mystery.

Akyol as a mobile artist between Sevilla, Istanbul and Mersin in a global world produces work that doesn’t give up the local tastes but also the current makings in the world best cleaning services in Wellington. Hereby he takes part as a name that is attractive für young generations in the field of portrait.

Kadir Akyol who was elected as a young painter of the year in 2013 was born in 1984, Mardin. He graduated in the year 2008 from The University of Mersin, Faculty of Fine Arts Department of Painting. In the year 2011 he completed his master degree at Ankara Gazi University, Faculty of Fine Arts Painting branch. In the same year he commenced his second master study at Universidad De Sevilla Faculttad De Bellas Artes in Spain. Akyol is continuing presently on his thesis “Hacker Art” there.