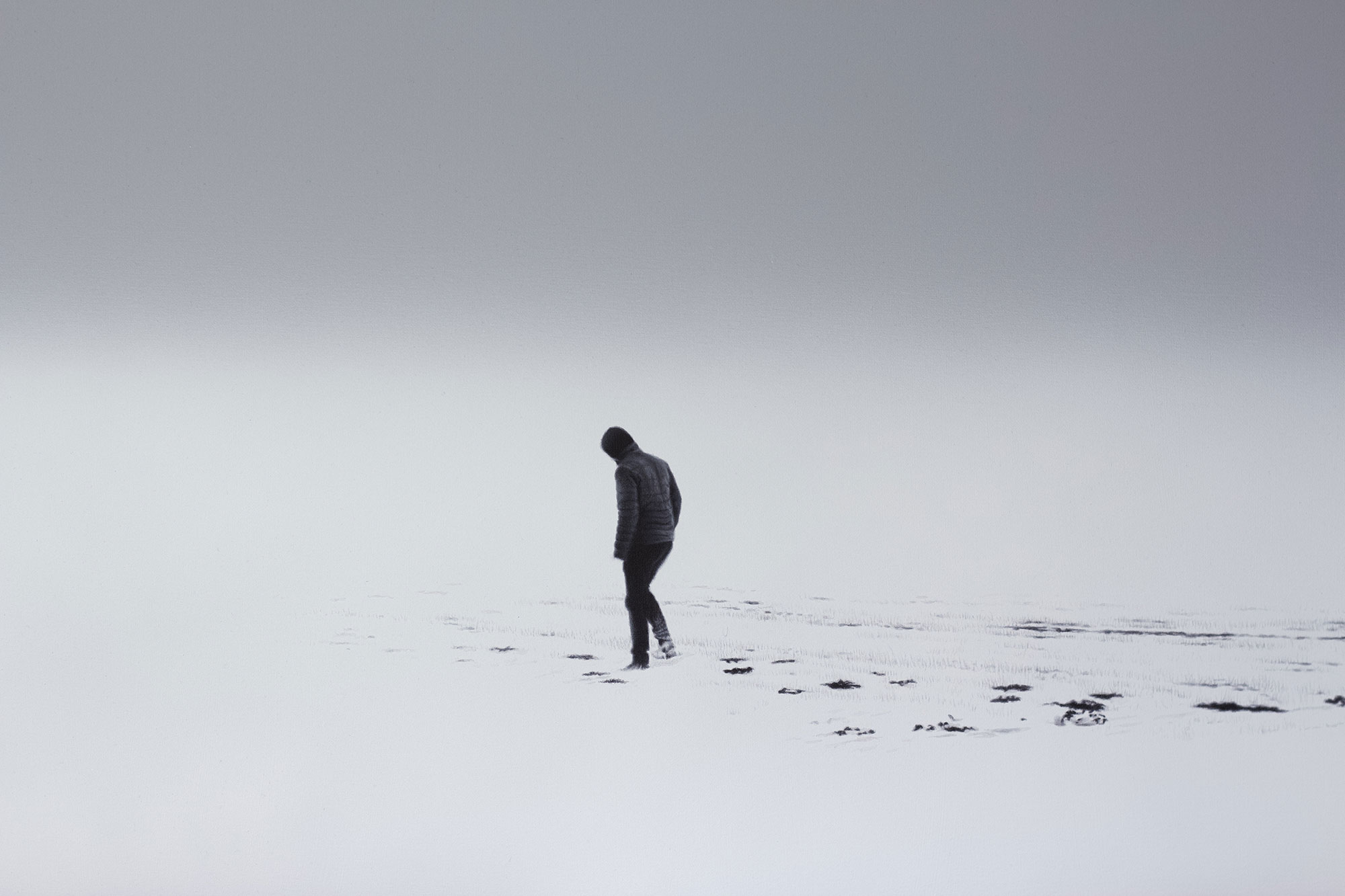 A faded sun behind the mist.

A bird flying above.

A realm under the rule of cold and silence.

To reflect the charm in the simplicity of nature he benefits from mimesis and the concept of the sublime. The emphasis on snow and winter in these landscapes where time is stopped, figures are frozen and motion gives its place to stillness, constitute the general atmosphere of the paintings. The whole story changes in Kalkızoğlu’s paintings by the various constructions of recurrent symbols such as the dead tree, the bird, the sun behind the mist and the moon in the dark sky. In this respect, he tells much by giving place to a limited number of figures which touch upon the concept of the rhetorical sublime initially suggested by Longinus (213-273 A.D.).

Kalkızoğlu finds the sublime in nature just like the British Romantics. Some of his landscapes in which the sky occupies more space and that has a realistic perspective, are closer to the Aristotelian mimetic representation of nature. On the other hand, in some others, in which he interprets nature in his own way by reducing the perspective to a single plane and using light and composition harmoniously, he creates a fantastical or surreal world which is not mimetic at all. Using this kind of an atmosphere the artist aims to transfer his own emotions to the spectator, and shows the power behind simplicity, at the same time displaying the sublime in the aesthetics of Edmund Burke (1729-1797) and Immanuel Kant (1724-1804). Although Burke and Kant differ in some matters, they both suggest that strong emotions like fear and terror generated in the spectator by the unknown, irrational and improbable also reveal an inherent pleasure. Regarding this issue, when being evaluated together with catharsis, Kalkızoğlu’s works activate the feelings of pain and pleasure in the spectator by leaving them in terror which is then followed by a feeling of awe as the spectator looks into the middle of darkness where only a tree is visible. Similarly, an atmosphere covered by mist, behind which there is only uncertainty, allows the spectator to fill the gap using their own minds and in Umberto Eco’s words give rise to an open work. If we go to a deeper level, regarding the relationship between the usage of lighting and space in some compositions in which the artist limitedly illuminated and mostly left in the dark could even bring out the unconscious fears, desires and unresolved conflicts of the spectator from a Freudian perspective.

In his works Kalkızoğlu displays a unique sentiment by giving place to only a few figures and takes the spectator under his influence with the feeling of the sublime and catharsis. He invites the spectator to experience the pleasure-giving effect of feelings of loneliness, sorrow and melancholy by his compositions which puts so much effort on simplicity.

Which One?
Group Exhibition