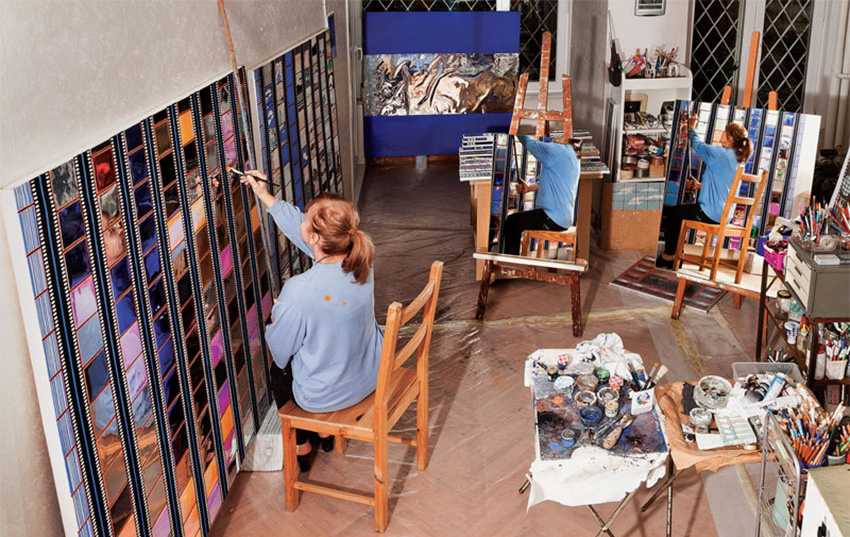 In a time when technical “trick”s have facilitated making art immensely, a young woman, Ms Minâ Sanver, whose works I have been following for many years, preferred to stick to the classical rules rather than adapting to the general trend.

MinâSanver knows how to draw. Firstly, she chooses the colours that will cover the drawing meticulously and lays her careful mixtures onto the canvas patiently. The oil paintings you will see in this exhibition are the results of long preparations, which were accumulated in advance. Therefore, by reaching a result that justifies the aphorism fromAndré Gide “Art is the product of a long patience”,Minâ Sanver has set her future on a firm basis.

In fact, the result of today should not be considered as a constant, absolute result. In art, today prepares tomorrow, and tomorrow the other day. Hence, all through his life an artist is alone with the fate of climbing up a ladder rung by rung, whose endpoint cannot be seen, and of moving towards a better, more steady place than the previous one with each step.

I sense this quality in Minâ Sanver. A kind of modesty mixed with an effort to create fine works. Once modesty is mentioned, I always remember Georges Braque; “An artist does what he can, not what he wishes.” It was this consciousness that made grand Ingres wait at the doors of Louvre: To copy the drawings of Albrecht Dürer. Not during his student years, but at the time when he became Jean-Dominique Ingres. Let’s leave Ingres for now, and recall a story by La Fontaine. The story of the tortoise that arrives at the finish line by walking towards his aim slowly, and overtakes the hare, which thinks he would win anyhow and enjoys himself here and there.

With her first solo exhibition, which she opened because of my insistence, Minâ Sanver shows that “she can”. Many people would be content with this result and repeat themselves, but when they come to a crossroads, they do not know what to do. I do not see this attitude in Minâ. She has grasped the seriousness, difficulty and importance of the profession. I think she will continue to climb the rungs of the art ladder and rise as high as she can.

As her teacher, who have done nothing except being a mere guide for her like the priest to whom that famous painter of Renaissance said: “You pray that I succeed in this difficult task”, I prefer to wait for her upcoming works and wish that Minâ Sanver walks eagerly on the road she has chosen.

*IT WAS WRITTEN FOR THE FIRST SOLO EXHIBITION OF MİNÂ SANVER.