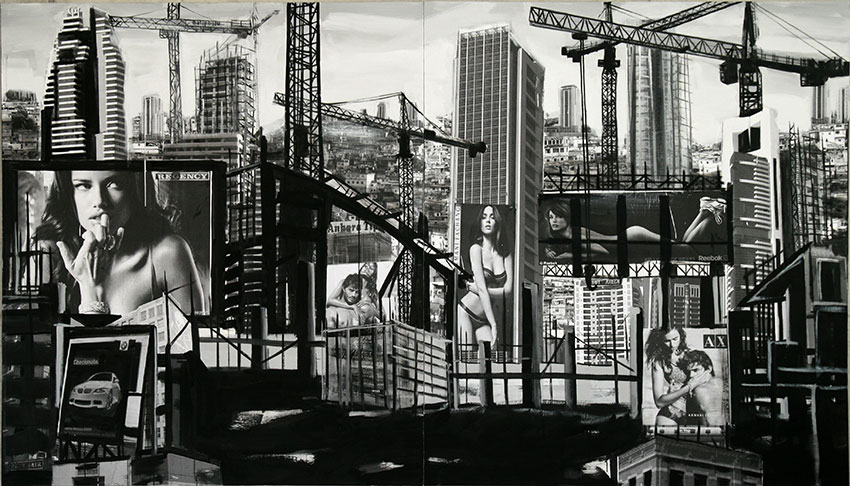 The general characteristics that emerge in the texture of a city are the projections of that city’s creating an identity for itself. The silhouette of a city which moves in a visual kinesis like an organism, is the vitrine of the sociocultural space owing to the constant change and transformation it undergoes. The state of continuous formation of a city in terms of design and aesthetic, means that the construction process within a city is always present. This construction process is the indication of a longing for transformation. The landscapes forming around the newly built architectural structures are regarded as memory maps of the transforming parts of a city.

Scaffolding, being an element used in the process of creating a motif, appears to be one of the bases on which the modern culture stands. Besides, the skyscrapers of Modernism rose up resting on these gigantic scaffoldings. Motion that it contains within itself, appears to have a futuristic attitude.

Perception of Transparency in Urban Spaces

Another element that forms the general concept of the structure Mustafa Duymaz uses in his works is transparency. This situation shows itself in the designing process both as providing the unity of inside-outside life and also as rendering the readibility of the physical features of the structure from the outside possible. The visual fluidity between the interior and exterior space creates mediums which unceasingly connects and associates the urban context with the structure’s internal dynamics.

In today’s architecture, the “visibility” of the material begins to diminish and even to turn into emptiness owing to transparency and the technological visual bombard (Baudrillard, 1998).

That people are distant and mysterious to others who live in the same building with only a wall between them, creates the perception of permeability that cannot be recognised in the urban silhouette in general. The urban gaps, which give the feeling that everything is apparent, are actually structures that hide humans. There is the idea of creating rooms that hide the intimacy of the shared space and also creating spaces that actually appear to be unified, but are fragmented. Similar fragmented spaces are also created in the works. The people, who wander in the crowds of the urban environment as though they have built invisible walls, struggle with the problem of loneliness as if they were locked up in transparent rooms. Although this situation is not reflected on the works figuratively, there are invisible lives in the buildings which are constructed as transparent. The reflection and indication of the lifestyles of these people, who are thought to be living somewhere over there, are this semi-transparent urban silhouette.

The Concept of Infinity

In fact, the idea of infinity and emptiness that he deals with in his works, is spatial. A definition of the sky, which is tried to be emphasised with the idea of the open skies that emerge in the urban space, is aimed here. Rising architectural forms reflect the meaning of intervention in this idea of the open skies. The vague perception of emptiness between the buildings is the last spot the eye seeks in order to rest. It has begun to get difficult to create these freedom territories between the buildings which cover the emptiness like curtains. Nevertheless, despite all, the perceptible sense of emptiness is regarded as an element of pleasure.

The elements that make up the urban silhouette visually emerge from its sociocultural structure. This eclectic structure, which bears the characteristics of different eras, may sometimes go out of the insiders’ control. This situation may result in the fact that the silhouette, which is shaped by the decisions of the people who govern the city, often goes astray from what is accepted by the city-dwellers. Nevertheless, people form a link with the city through specifiying districts in a city which have got characteristics that they associate with their own identities. The visual urban identity, which appears with its very general characeristics when viewed from afar, is used in some of the works. This perception of the city, which is demonstrated here as a whole, defines the medium as an indication of a lifestyle. Either modern or not, this medium is shaped by its own nature. This silhouette’s own image, which is divided into labyrinths, grows and grows, and departs from the limits of perception, is treated as a subject.

Elements of Consumerism and Modern Cities

Consumerist culture is striking as one of the significant elements of modern cities. Enormous centres, which formed due to the proliferation of large shopping malls and transportation of the consuming habits to certain locations, result in distinctive visual effects for cities.

Obviously, the most distinct effects of globalisation can be felt on cities and the city-dwellers. Starting from the governing system of cities, physical urban space, lifestyles of city-dwellers, their consuming habits, most of the recent changes in the economic and social structure bear traces of the politics and practices, which have become dominant due to globalisation. With this new global system, our cities as well as their economies, lifestyles and people are tried to be put into one system. In another words, urban spaces receive its share from today’s mentality of consumerist culture; accomodation, places of rest-leisure and work are continuously getting associated with consuming. Especially the chosen politics after the 1980s, the cities of in our country joined in this changing/transforming process too (Kiper 2004).

Advertisement and Sexuality in Urban Spaces

The urban space, where huge billboards have appeared and enormous photographs are hung on buildings, is before us now. Colourful and lighted billboards, huge cinevision screens, buildings decorated with lights, the visual festivity appearing like scenes from a fair are striking. Images, which are imprinted on by the big brands, have become a requisite for the registration of a city’s modern identity. This visual richness and the traces of progressive process are tried to be reflected upon the urban silhouette.

Images from advertisements and visuals containing sexuality, which are used in some of his works, stand out in the urban texture widely. The reason behind emphasising especially the images containing sexuality could be perceived as re-associating the commodified human body with the city.

With the growth of cities, billboards also began to get bigger. Scale is continuously changing and humans are continuously compelled perceptionally. There is constant visual bombardment in the form of a memory shock. With the concept of “mega”, signs have also been enlarged. In the same way, the phenomenon of sexuality also re-appeared with the images designed in gigantic dimensions. By that means, the appetite of the city-dweller, who is perceived as inescapably forced to attract attention and as being continuously consuming, is tried to be kept keen at all times.

Doğu Çankaya ‘The Diaries Of Doğu’