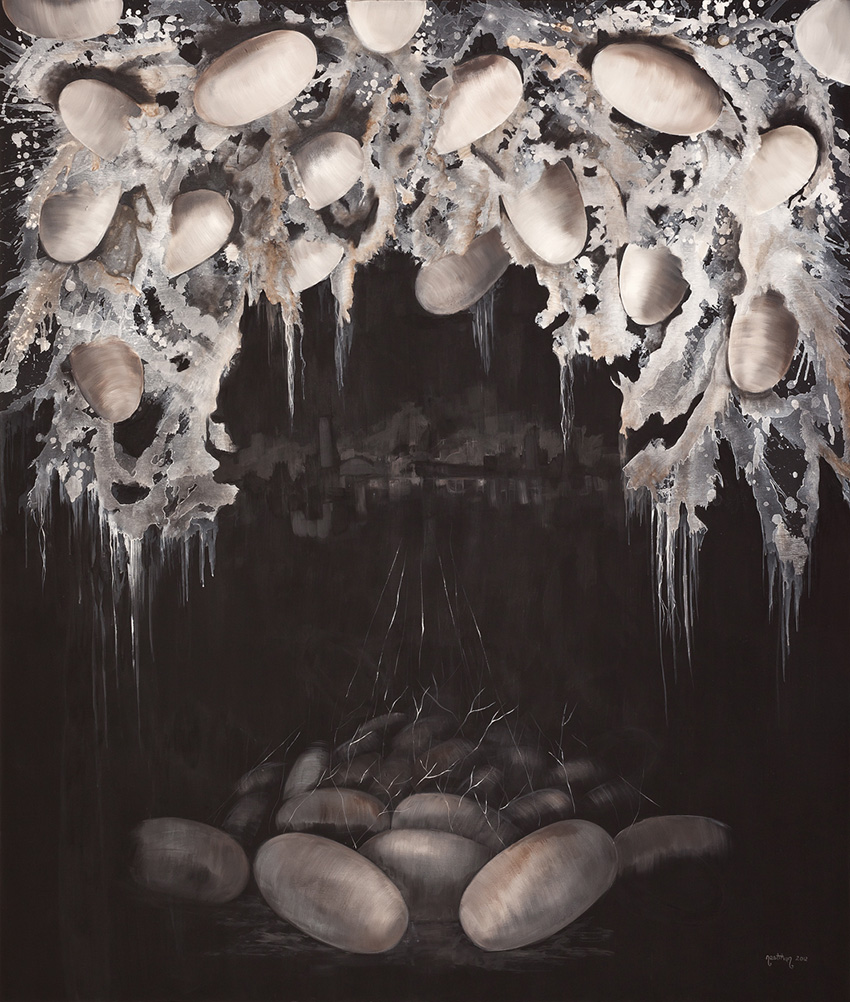 He who would learn to fly one day must first learn to stand and walk and run and climb and dance;
one cannot fly into flying.

Cocoon is the form of staying inside and being still. It is an absolute seclusion, a state of being all alone. It means turning to oneself, being separated and then reuniting with oneself, mixing and multiplying with oneself, and being completely reborn. It is closed to the external time, and bound to an internal time.

The word cocoon derives from the words Kokkos, “seed” in Ancient Greek, and Coccum, “berry”in Latin. According to the word’s etymological adventure, the word acquires the meaning of crust, when “cocon”, which derives from coque in French, meaning “crust”, passes onto other modern languages. Known in English as cocoon, this word means a natural covering, and since 1986 it has been used as a verb meaning “staying inside and being still”. Therefore, cocoon means an enveloping crust that isolates one absolutely from the external world with the aim of protection.

The relationship between a cocoon and caterpillar resembles the relationship between an individual and his own self. Cocoon is a limited form, and hence it points to a kind of life that takes place and develops in a limited volume. Every caterpillar, whose destiny is determined, goes through the “same” adventure in its own cocoon in different ways. The process of transforming from a caterpillar into a butterfly is a moment of looking inside. A human being’s awareness of his own self is a similar experience of looking inside. Just like a caterpillar’s weaving a cocoon on itself and being isolated from the external world turning inwardly until the time comes when it is reborn as a butterfly, human beings also return to their crusts sometimes in order to discover and finally to know themselves. This is the exciting thing in a butterfly’s adventure: The matchless moments when it stops the ordinary time turning inwardly, in the limited linear time whose one point is life and the other is death.

The Butterfly in Mereflects the absolutely personal inner experiment of Özgenç, who completely shut herself off the external world and turned inwardly during the process of creation.

Özgenç who says that “The image of cocoon and mutability of caterpillar verging on the dimensions of nothingness express the meaning of a visible butterfly and invisible time inside nothingness. And, the layers of time drag a living thing into a waiting period, which ends it with death,” wants to emphasise the infinite struggle between life and death in a finite time and space with the image of cocoon.

Neslihan Özgenç’s fifth solo exhibition The Butterfly in Me comprises the latest works of the painter discussing issues such as existence, nothingness and eroticism over the imagery of butterfly cocoons.

The painter uses backgrounds in black so as to emphasise the isolation of the entity in cacoon from the external world, which can neither be called a caterpillar nor butterfly, and thereby she paints this seclusion by evoking a sense of being in-between, like Purgatory, in the viewers. This void and sense of being in-between, which the black backgrounds have created, are in contrast to the bright movement that emerges out of cocoons and marks life. The serenity of the black background and its effort to swallow light, the dynamism of brightness and the will to live are in a state of tension. Özgenç carries the dynamism, life and transformation which take place inside a cocoon with awe, outside of it via this bright gesture. Owing to this gesture, she gives clues of the world inside a cocoon. Therefore, she both invites the viewer into the cocoon, and also leaves him outside. The painter, who paints transparent layers over and over in order that this inner experience, in which time and space lose their known meanings, gives an extraordinary sense of temporality, grasps a kind of visuality that gives the impression of photography on canvas with this method.

All in all, Özgenç invites the viewers to dare to experience an inner experiment, a “self-to-self” emotion with The Butterfly in Me.

Çiğdem Erbil ‘The Discourse of Colours’