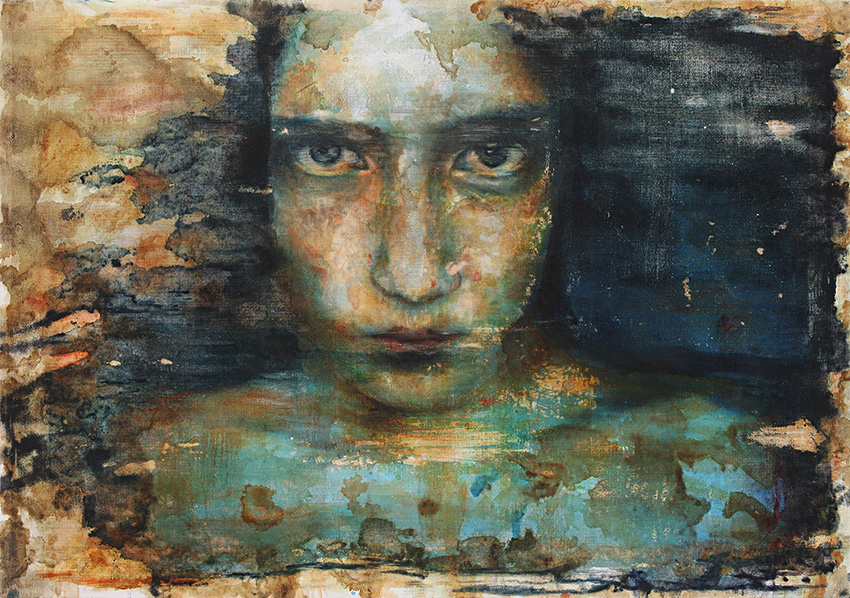 These emotions-moods, these themes that can be considered within the scope of the exhibition’s title “Mood”, each containing references to a psychosocial situation and meaning humanity in general appear without hiding anything in the works of Nezihe Bilen.

In order to not be the prisoner of the image she considers and uses, Nezihe Bilen acts by pulling the image completely into pieces and then reproducing it by adding herself, her emotions. Rather than graying and silencing all the images and telling too many things through the image, she seems like saying “this is me, I exist” with all her calmness and plainness.

She keeps her painting away from the simple perception easiness trap by not repeating the image, closing it to direct perception and by opening doors for different perceptions. She prefers an attitude preferring to say something within its own silence and bringing the Lyricism to the fore rather than vociferating, noisy works.

The dynamic lines and paints in the painting of Bilen are just like a saw shredding, dividing into pieces with severe movements just like used for not being the prisoner of image and not falling into the trap of image. Rather than making us question, Bilen seems like she is busy with her inner conflicts. She appears to revive an image, which has been inured and almost lost its magic, by adding her own independent soul and feelings. She tries to bring out the pattern and pentur together with the subject to the fore, on the contrary to the photo-realists, while showing the subject, and tries to make us feel an inner situation beyond what’s seen.

It is almost impossible to define art as an expression and communication style with the language of the past and with a single perspective as today’s art is complicated, relative and eclectic in terms of shape, aesthetic and concept and as everything is considered as appropriate of art. And in all this confusion, it becomes harder for the artist to position herself and to stay away from the market concerns. Therefore, the artist has the concern for getting to a more independent channel away from this situation and getting more alone.

Considering this point, Nezihe Bilen continues to create her own path and to flow in her own channel with her naïve, sincere and true preferences with her introverted personality minimizing her connection with the outside, away from actual aridity without trying to get integrated to the market.

Nezihe Bilen shuttles between searching for her own inner reality and painting the reality.