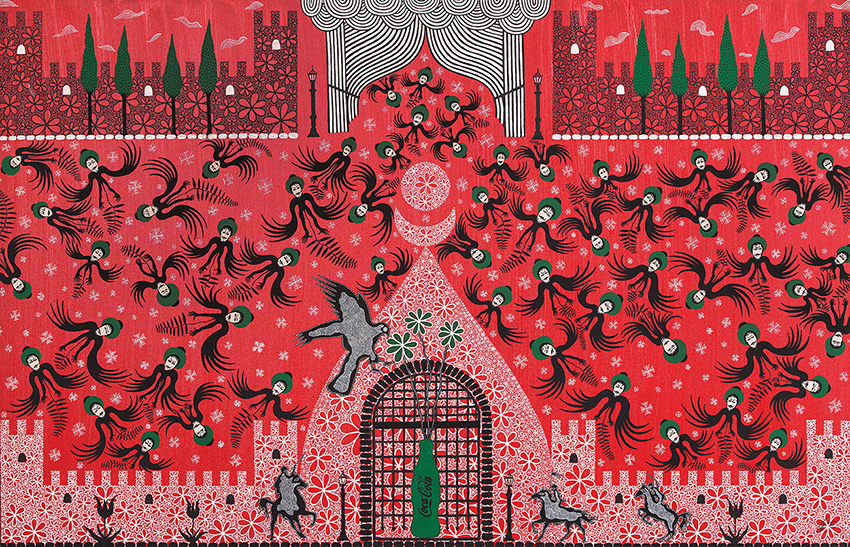 “Suicide is not a form of death, but a choice of life,” says Güven Turan, the poet.

Suicide, it seems, can be analysed under two titles:

a. Suicide as a “Choice of Life” through artwork/invention.

Science and art are first the torturer, and then the murderer of their creator and master. Every artist is killed by his art through torture.

In our region, primitive scientific experiments by all inventors are actually a suicide attempt.

Many such personalities, including Ismail al-Jawhari, who attempted the first flight 900 years before Wright brothers, Hezarfen Ahmed Çelebi, who, inspired by al-Jawhari, managed to fly from Galata Tower to Doğancılar Square in Üsküdar, the nameless man, called Sarakeno (Easterner) by Byzantine historians, who is known as the first-ever parachute jumper using his long white clothes as a parachute in order to jump off the Obelisk in Sultanahmet Square, Ibn Firnas who built first manned rocket running on gunpowder, and Lagari Hasan Çelebi, have undergone various torments because of their inventions; consequently, they either died under torture or were victim of their own invention.

According to Sultans, the survivors of such scientific experiments were men to fear; therefore, they were exiled to distant realms. Some died during their tests, while others perished in exile. Once dead, they were occasionally dubbed mad.

Scientist and artist owe his ontological being to his murderer. He nourishes and raises his killer, who is nobody but their works and inventions, also their raison d’être, that wait in ambush with malignant plans. Artwork-invention, is a kind of boomerang-like bomb; it comes back to kill the creator.

A. According to definition by Einstein, science is “the attempt to make the chaotic diversity of our sense-experience correspond to a logically uniform system of thought.”

Poems never end, but pretend to be so. Neither the poet nor the reader can complete a poem. Likewise, science is a kind of never-ending poem.

What matters in science and art is what you look for; however, what you find does not belong to you.

b. Suicide as a “Form of Death” without artwork/invention.

In our region are present the “holy” suicides by “Aja’ib al-Makhluqat” who seem to come out of miniatures and who can outdo any black demons and hellhounds in such books. The evil deeds by these unique Gog and Magog who aim at the rooted human civilisation and its standards of judgment in order to destroy and degrade them. Suicide without subject, death without meaning.

Those beyond their time can not be understood in their lifetime. They are but an insignificant unknown in equations outside them. The soil, fallen into earth, has nothing to do but to be dragged.

Tongue and hand are the two most important instruments for the creator, who is a kind of producer, in order to materialise and embody his creation or invention. One which the tongue cannot express is put forth by hand. Hand is another tongue speaking. Whatever you cannot have or kill with tongue, you do with hand. Both the tongue and the hand can create, keep alive, call into being and destroy. This most common killer and creator “tongue-hand” murders hundreds every day. But it also breeds as much. There is no difference between waving a cleaver onto the rib of an animal and sending an evil word into the heart of your beloved. If death is in question, the form does not matter. If the deficiency is not about mind, any shortness can be matched with a length. Those who don’t know how to track become captives of their fantasies.

Black and white come together only within the dark of the night. In daytime, white sways in the blue of the sky in form of a cloud, while black falls in corners as a shadow. Black looks for a place to hide as shadow, while white attacks the darkness of sky as a star. Those who cannot enjoy the love through pushiness of white are condemned to cynicism of black.

The domination of dark by light is both necessary and inevitable. The rails, laid down by an insensitive and loose mind, are doomed to rust. Therefore, life should be read through the cubic perspective of the time and written via linear perspective of Enlightenment.

“Being bombed, some of the wasted birds had their wounds of mind and body painted, but could sell none.” Nilgün Marmara

Nurdan İskender ‘Travels From Outside Of The Line To The Inside’