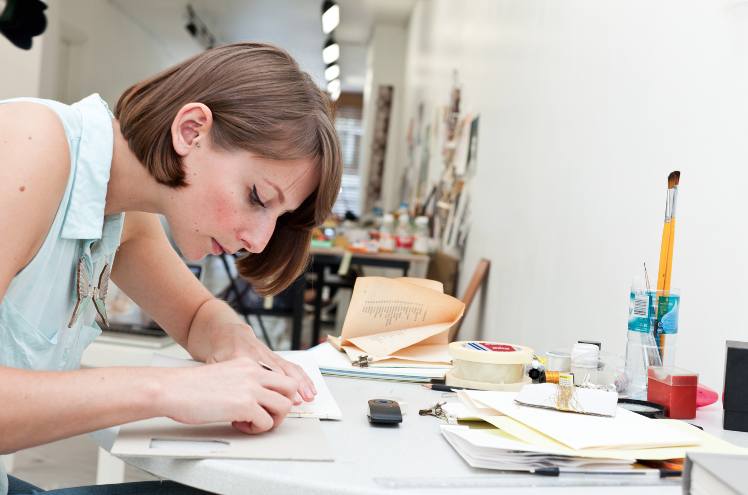 The exhibition titled Impressions and Responses is the outcome of the international artist-in-residence programme Gallery/Miz realised for the first time during the summer months of 2012. Gallery/Miz, which continued its yearly programme with new exhibitions during the season, underwent a change of spatial policy for the summer by turning its exhibition space into a studio, and started its artistin residence programme with the aims of providing an environment for the new productions of young artists, of bringing international young art to Istanbul’s art scene and of increasing cultural dialogue.

Being different from the common culture-art spaces, which organise only artist-in-residence programmes for certain periods of time, Gallery/Miz turns into an artist studio solely during the summer months; as a consequence it merges two completely different working systems in one body, and in addition to exhibiting and presenting art to the viewers, it also has the opportunity to feed on these two systems both as a witness and as the location of art production processes and artistic creativity. During the months of June – August, Gallery/Miz hosted the artists Sadık Arı (Turkey), Charles Garcin (France), Helena Hernández (Mexico), Naci Güneş Güven (Turkey), Rebecca Travis (England), Elize Vossgatter (South Africa) and Emma Wieslander (Sweden) within the scope of the programme. The foreign artists, who stayed in Istanbul for 2 – 3 weeks and used the gallery space as their studio, collected their impressions mainly from the city, local culture, language, local folk arts, historical and cultural heritage of the city, contemporary life, and they responded in different ways to these impressions with new works, which they created according to their own artistic practices; whereas the Turkish artists bravely undertook a search for novelty in their work and brought about different experimental dimensions, either in terms of technique or theme, to their work and in a sense they asked new questions to themselves and came up with new responses.
Gallery/Miz, which will again turn into an exhibition space with the first exhibition of the season Impressions and Responses, brings together the art viewers with the artworks inspired by space, Istanbul and culture, and created by 7 young artists during the summer. The responses given to a given space and culture by the artists of different social, cultural and educational backgrounds show us what an enormous wealth of interpretation art does allow per se as a medium.