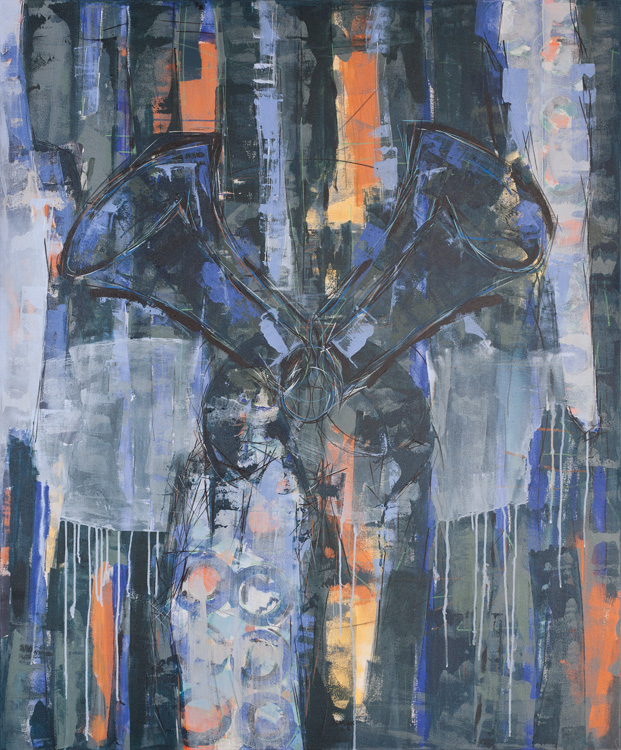 In his work entitled “Eye and Mind”, Merleau Ponty tells such thoughts of Klee from Andre Marchand: “In the forest, what I sensed most of the time was that it wasn’t me who looked at the forest. On some days, I sensed that trees looked at me and talked with me… I was there, listening to them… I was thinking that the universe should penetrate through artists; artists should not penetrate through the universe… I was expecting my inner world to be submerged into the water; I was expecting to be overwhelmed. Maybe, I am painting just for showing up all at once”. He goes on with inspiration: “The thing called inspiration (inspiration means inhalation [Fr. Inspiration] must be understood with its lexical meaning: An existing thing inhales and exhales. Existence contains inhalation and exhalation within it; this consists of action and passion which are so barely distinguishable from each other that at this point it is not clear who sees, who is seen, who paints or who is painted. Indeed, a human being is claimed to come on the earth when the potential ‘visible’ thing existing in mother’s womb becomes visible at the same time both for us and for him. An artist’s perspective is continuous birth”.

The fact that inspiration is examined based on the existence idea takes us to another existence concept in Zeynep Dilek Çetiner’s works: ontology of the work. Ontological categorization corresponds to the layered structure of Çetiner’s paintings. The overlapping paints conceal previous ones while at the same time makes them visible in their changed forms. In other words, the artist reminds us vision and what is behind vision. Abstract creation concept takes place just through these reminders. Containing no representation or image from the outer world, abstract painting only reveals itself as the existing thing. It shows the invisible things concealed behind colors and lines. It deprives us of our initial sense-making efforts.

It creates representations and sensations in a different way. No matter how much we associate it with the sense to see the painting, the structure of Zeynep Dilek Çetiner’s paintings takes us to a different sensation which we think to be far away from visual arts: Touch… Peeling off the scab on artist’s overlapping paints and screenings creates a sense of re-looking, re-hiding. The indecisive attitude going between touching and not-touching takes us to a confrontation. To face with the paint, with us shown in the painting which is both familiar and strange as Narcissus’ effort to reach his reflection on the lake… Now, looking at a painting exists out of the looking action. Looking at a painting is also the activation of all senses, the mind and the part beyond mind. The work is reflected to viewers and it is re-completed just like the case where viewers are re-completed with the reflection of a part of their own.

Let’s return back to Ponty. The following sentence is written in that above-mentioned book: “My visible and moving body is among things, it is one of these things; it is in the texture of the world and has the consistence of anyone of these things. However, it keeps these things in a circle as it sees and moves. They are its additions or extensions. They penetrated into its flesh; they constitute a part of its full definition and they are woven with the fabric of world’s body.

The area that body language covers within the work especially in abstract expression painting concept is much larger than the presumed one. Most of the time, the motion on canvas’ layer also indicates body’s motion. Çetiner’s acts and forms as well as her circles also implying arrival to the eternity are also related to artist’s physical existence and motion. The intervention made in lyricism also recalls an allusion to the raison d’être of her art work. The work makes our mind to work simultaneously with our body and emotions while taking us to sensations.

The meditative structure of an artist’s works reflects his accumulations, working moments and at the last point it reflects his existence as an artist. This reflection turns into a cycle going from the artist to the work and from the work to the artist.

Each mind revolves once more against each work and each mind makes each work revolve. The eyes of viewers step in when artist leaves the ground. This time, a flow begins between the work and viewers. The existence of the work is also a reflection of viewers’ changing, revolving identity.

Çiğdem Erbil ‘The Discourse of Colours’